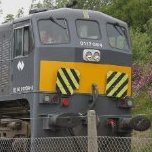 By RobertRoche
February 7, 2015 in Workbench

Top Posters In This Topic

Class 2700 I took time over the last two weekends to complete this build. Most of the first weekend was devoted to altering the lighting to circuits to show 2 whites headlights rather than the 'd

Irish Footbridge I have modelled the footbridge that is present in Wellingtonbridge. This footbridge is similar to many of the pedestrian bridges seen across the Irish Rail network. There are sev

Sugar Beet Sampling Wellingtonbridge was the primary beet loading site in south Wexford until the sugar beet traffic ceased in 2005. A large mechanical beet loader loomed over the station, which